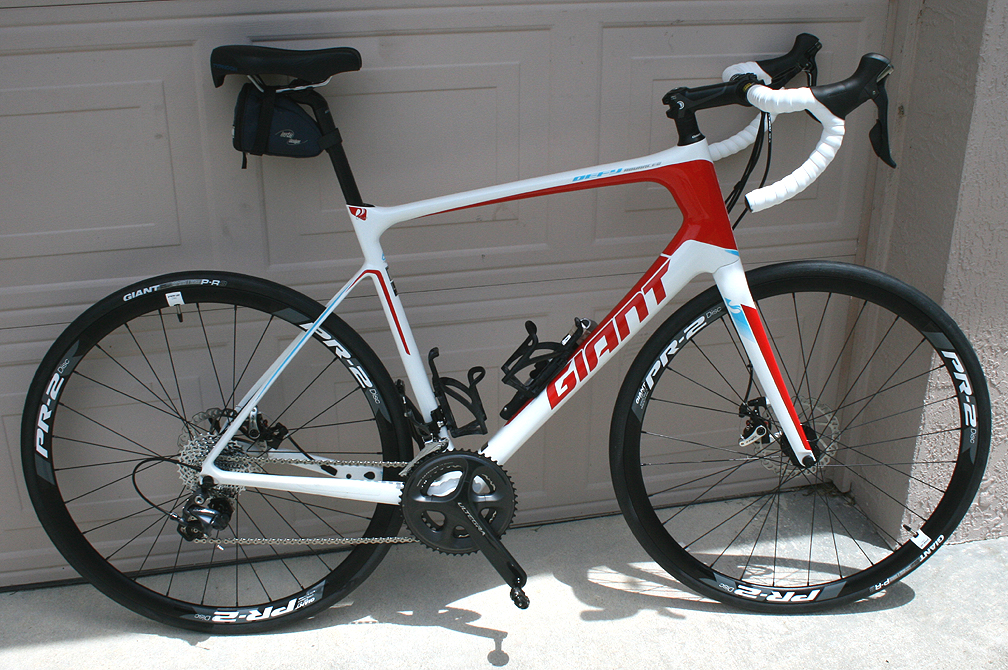 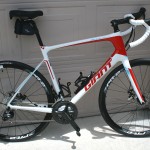 (A note from the author John Tenney: My disclaimer: I come from a math and engineering background although I don’t do a lot in those fields right now. So although this article may appear to be “techie” it’s probably full of outdated tech references. My apologies in advance. Also, I have sold this bike to my good friend Ruben who absolutely loves it. JWT)

I’ve had a road bike with disc brakes for over a year now. In this article I will share the pros and cons that I have discovered or discerned over that period.

I originally bought the bike pictured here, a Giant Defy Disc Advanced 1, with one descent in mind: Hogpen Gap in North Georgia. Hogpen is the “featured” section of the infamous Six Gap Century ride, held every year on the last Sunday of September.

The climb is horrible enough and is talked about at length in many other places. The descent however, is also a huge concern (for me anyway). The first three miles of the descent feature several sections with a (reported) 19% grade, and on a really really crappy road surface. In addition to not being a skilled descender (“long descents in Florida?” uh, NO), I’m a Clydesdale, usually somewhere around 230 lbs for that ride, and physics takes over. I quickly reach a frightening speed which caliper brakes are “challenged” to handle. 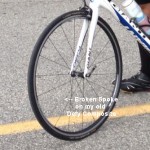 In fact, in 2013 I rode my caliper brakes so hard on this descent that the rim heated up and the brakes began to “fade” in the last mile of the steep part. I completed that last mile with some luck and not without extreme terror. Immediately following the descent, on the flat part, I had a spoke break on the front wheel. This ended my ride prematurely as I had no way to repair it.

Was the spoke failure related to the stress of the descent? I would guess it was. I can’t see how that descent would not cause extra stress on all parts of the bike, let alone the spokes.

In 2014 I completed the ride without incident on my disc brake road bike. The results on the descent were … well let’s not get ahead.

The rest of this article will discuss the pros and cons I have discovered so far with disc brakes on a road bike. Let’s start with the cons.

Let’s look at the front brake first. On a caliper brake system, the braking moment is distributed somewhat evenly between the caliper location at the top of the fork and the hub at the end of the fork. The resultant vector originates from somewhere in between, giving an approximate torque arm length equal to about half the length of the fork. On a disc brake bike the entire moment stems from the hub causing a torque arm approximately twice as long. You don’t have to be Archimedes to figure out that extra reinforcement is required on a disc brake fork, thus adding to the weight of the bike.

The rear brake has similar issues. All of the torque is directed along the chain stays. Thus, the chain stays and other supporting structures must be reinforced accordingly.

I’ve noticed that I scrape my feet on the sides of the chain stays more on my disc brake bike. This is to be expected. There is a disc brake assembly there now that requires a wider gap between the chain stays. Not directly performance reducing but it gets annoying. I’ve had to change my pedaling style and yet there are still black scuff marks where my shoes have scraped the chain stays.

There are more and more companies making disc brake road bikes and wheels, but still not enough to create a healthy, competitive field. I don’t have a spare set of wheels, for example. I looked at getting some but I am not committed enough to the bike to spend $2500 on a set of wheels I may never use.

That’s about all I can think of for cons. Let’s look at the pros:

I know. You were expecting this to be a downside. Oddly enough, the brakes are incredibly easy to use, and since I have mechanical brakes (not hydraulic) they are also very easy to adjust or repair on the road, should that ever become necessary.

The majority of people will tell you that hydraulic brakes are far better than mechanical. While probably true, my own experience with hydraulic brakes on my mountain bike has not been great. Granted, my MB has a set of really low-level Avid brakes. They require constant care and have to be “bled” far too often.

Setting that issue aside, I noticed no lack of control using mechanical disc brakes. So if hydraulics are better than that’s something I look forward to in the future.

Wow. That’s all I can say. They work. The bike can stop on a dime.

The control is there. Squeeze harder on the handle and the brakes work incrementally better. The control is what you wish you had with a caliper brake but you don’t. This includes steep descents. In fact they are so good on steep descents that it is vitally important to remember to keep your weight back when braking. Anybody familiar with mountain biking knows what I am talking about here.

This is sort of a touchie-feelie, nebulous comment, not technical at all, but my confidence level was higher knowing I had the braking power I would need.

So Did They Work?

YES. The Hogpen descent went from being terrifying to a lot of fun. I had the confidence that I would be able to slow to a manageable speed, for me anyway, before each blind corner (quite a few on that descent) and enter it safely. There was one really steep entry to one of those corners where I let the speed build up to over 45mph and had plenty of brakes to slow to what I considered a safe speed for the turn. So in that respect, the experiment is a success.

I was one of only three disc users at the 2015 Blue Ridge Breakaway. It has yet to catch on.

So on the downside we have more weight, aero issues, foot scraping issues and the most significant, the extra expense of changing out wheel sets. On the upside we have fantastic brakes that are easy to adjust and inspire confidence. Interesting trade off here.

My final feelings on the matter is that the technology is here but the market is not. At least not yet. Until all manufacturers are selling disc brake road bikes and all wheel manufacturers offer reasonably priced wheel sets it’s not really practical to convert your “bike fleet” to disc brakes.

I still own the bike but it’s a “garage queen.” I prefer to ride a traditional road bike (a Propel) on all the group rides around Florida, and certainly in all the USA Cycling road and crit races. I also don’t see disc brakes showing up on Time Trial or Triathlon bikes any time soon, unless some technical prodigy figures out how to hide them from the wind.

I’m glad I have one for the altitude rides but really, that’s all it’s for. I don’t need it in Clermont really, although it’s nice to have that braking power. As of today, September 3, 2015, I would not strongly advise most riders to invest in a disc brake road bike, unless you have “throw away money.”

Ask me again in a couple of years though, when the technology and the marketplace has advanced.