The Sprint and My First Triathlon series continues in the same location March 10th.

Our club did not have a lot of representation at this event but your author showed up to try the Duathlon, and ended up winning his age group (55-59) with a time of 2:51.

We expect a much better club turnout at the next Epic Sports Marketing event in April, the Spring Fling, in the same location. Distances will be the same, My First, Sprint and Olympic, but the lake will be much warmer.

May 12th will bring us the Rocketman Half Ironman at Kennedy Space Center. 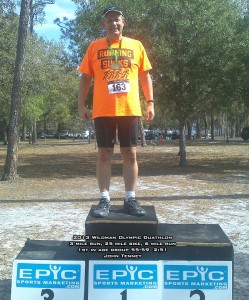