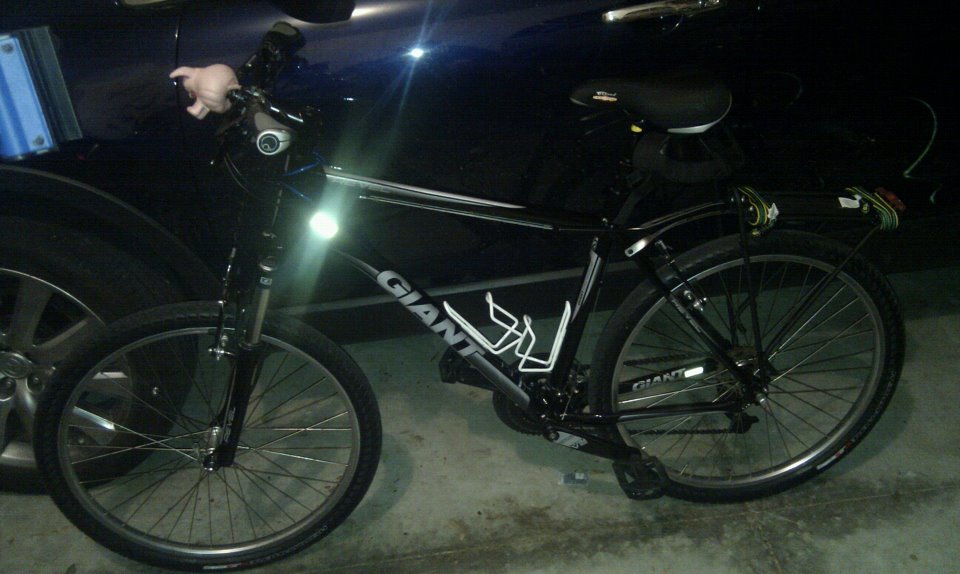 Encouraged by reports of successful commuting, our editors decided to give it a try: We tried two “bike configurations” – first: a ‘TerraTrike Sportster’, a 3 wheel recumbent tricycle. 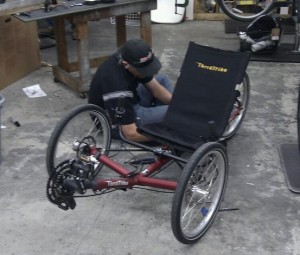 It required very little modification. We added a high-visibility orange flag on a 6′ mast, a carryall bag on the back, and a “blinkie” LED light.

Advantages of this type of “bike” (technically a tricycle) are: Comfort, stability, cargo (lots of places to strap things on to) and “novelty” (cars slow down to see “that crazy bicycle”).

Disadvantages include: Lack of maneuverability, lack of visibility (sitting too low), not fun on rough terrain, terrible in puddles, and a higher work load per mph.

It’s also no fun at all to bring indoors. We found we needed help to hold the doors open, at those places that allowed us to bring it indoors. Oh yes, we equipped both bikes with a flexible wire bike-lock.

The second bike, a Giant Revel mountain bike, was re-configured with touring tires and a commuter rack with 2 “captain hooks” (bungees with metal hooks.) We also added a carryall bag with a spare tube and tools, a “blinkie” and a front light as well. Advantages were a lighter bike, better visibility, better maneuverability and better over rough terrain (sidewalks, puddles, etc.)

Disadvantages were low cargo capacity, two wheel stability, not as visible as the recumbent bike (due to the low novelty effect) and of course, comfort.

On two separate days, we commuted approximately 30 miles around town in each bike. First, let’s discuss things that have become clear about commuting in general:

It would be a great boon to Orange County if the Little Econ Trail was connected to Cady Way Trail on the west and Avalon Park Blvd on the east as was originally planned. Right now it dead ends at Forsyth and Alafaya respectively. We inquired to the Parks Department as to when this planned (and paid for) completion was coming, and were told that the funds were diverted to “more urgent” projects and there was no budget to complete it. Unless by some miracle the county gets some state or federal grant money (and actually uses it for what it was intended) there is no completion planned in the foreseeable future.

Bike or Trike?
As far as the two different vehicles we chose, we came up with a few conclusions:

On the trike: Even though one feels terribly low and invisible in the trike, in fact it is the opposite. They are so rare that drivers spot them and take time to look at them. Bicycles, which are not as rare, just don’t seem to get the attention. The trike definitely gets a lot of attention on the trails as well. Be prepared to stop and explain how it works to many people. Also expect to give out some “test rides” as everyone wants to try it out.

Although the author’s legs were tired after 30ish miles on the trike, the comfort level was very high and the “sweat level” very low. Granted, it took a long time to get anywhere. This trike seemed to feel most comfortable between 10-13mph on the flat. It is definitely heavier than its two wheel counterpart.

People ask if it is hard to learn to operate it? No, it isn’t. The controls are very intuitive, although it takes a while to get used to the gear shifter being backwards (you roll forward for a slower gear.)

So the tradeoff seems to be taking a while to get anywhere but being comfortable and presentable upon arrival. You can wear long pants on the trike with a much lower chance of getting chain grease on them.

We found the bike in cruiser mode to operate comfortably at 12-17mph all over town. This is not an average speed, but it is what we saw when we looked down at the speedometer. Intersections and road crossings kill average speed.

Even though we got there faster, it hurt more. The standard bike saddle has never been known for comfort, and is certainly not designed to wear long pants such as khakis or jeans. We found that the speed was paid for with more sweat as well.

(Article is being updated for more information available. June 6, 2013.)