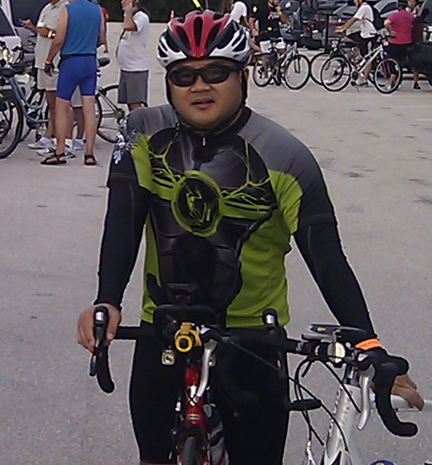 Is it Possible to Commute on a Bicycle in East Orlando?

“I started caring a lot more about my “carbon footprint” when I heard gas prices will hit $5/gallon soon.” Anonymous East Orlando Resident.

Tri Le (pronounced “Tree Lee”) commutes from Cypress Lakes to Oviedo, to his job as a pharmacist for Winn Dixie on a bicycle, riding between 50 to 70 miles a week.

“I started commuting more often to get saddle time for the upcoming Tour de Cure event (for the American Diabetes Association), but I will probably keep this up even after the event.” Tri tells us. “Especially if the gas prices keep inching up, as the media keeps warning us about.”

“Right now, I commute with my road bike with a Freeload bike rack rear system and an Arkel Tailrider trunk bag and front and rear lights for my commute home after dark. The route I use has a dedicated bike lane (419 from Oviedo to SR50), but some areas need improvement in terms of surfacing. Street lights in certain portions of this stretch of road would be nice since most portions I’m relying on my lights for illumination. 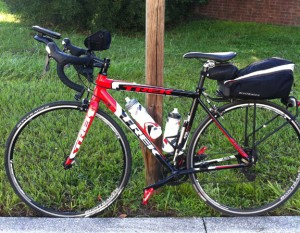 I did get run off the road on my way home once. The car came within inches of me which made me turn off road. Luckily, I managed to handle the bike to where I didn’t take a spill. This stretch of road probably isn’t the best for most commuters as this route is quite scary at times, but if someone were to take a dedicated bike route for most of their commute, commuting by bike can be very practical on a large scale.

Some evening news or morning news about bike/car safety would be nice, just to get the word out that more and more bikes are on the road these days and everyone (cyclists and motorists alike) needs to be aware of the rules of the road.

I should add that bike lanes (at least down 419) should be wider. I have seen people riding trikes and they’re pretty wide, so they’d be “crossing over the line” several inches, creating a bigger target on their backside. I understand it’s a big undertaking to widen lanes, so it’s just a wish.”

We asked some other commuters seven questions. Here is a response from Mohamed Mustafa Ahmed, originally from Egypt, but now a teacher at UCF. Mohamed lives on Woodbury Road and commutes up to Research Park and the UCF campus. 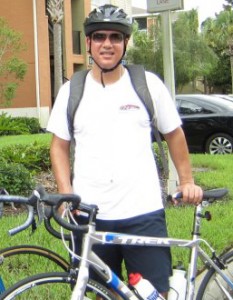 1: How many miles do you commute a week on your bike? Car?
“Thanks for the great topic. I usually commute using hybrid mode (my car/UCF Shuttle or my bike/UCF shuttle) or single mode (my car or my bike). My weekly commute is about 70 miles. The mode choice depends on many factors including; my mood at work and days I teach classes (I work as a Research and Teaching Associate at UCF), weather condition (I don’t ride in 50%+ rain chance), availability of my car (my wife uses my car at least twice a week-we have only one car), and parking availability at UCF (it gets crazy sometimes, 40+ min. to find a parking spot). I can say that it is around 40% by bike and the rest is car/shuttle.”

2: If gas really goes to $5/gallon will you commute more?
“If gas goes to $5/gallon, probably I will go back to Egypt (hahaha). Sure I will try to work from home (but not from home country) and commute less. Also, will bike more.”

3: What type of bike do you commute with?
“I commute with my hybrid Specialized Sirrus because it has lights and regular pedals (so I can wear tennis shoes).”

4: Do you ride mostly on roads, bike lanes, dedicated bike paths or sidewalks? What percentage of each?
“I bike mostly on roads. Only at night on my way back I ride on Woodbury sidewalk.”

5: If the county could improve things for bikes, where should they start?
“At least about 10 mile circle around all schools/universities should be provided with bike lanes to encourage students to ride more. By doing so, they will raise healthier generations that like using green modes.”

6: What do you wish more drivers knew about bikes?
“Actually, we need to propose to DHSMV to change their driving test to include a comprehensive section about bikers and pedestrians safety regarding their rights and duties toward each other. In summary I want drivers to stop at the stop signs and before the stop bars, especially at driveways. Also, they need to understand that bikes share equal rights as they do. Finally, they need to share the road by yielding to bikes more.” 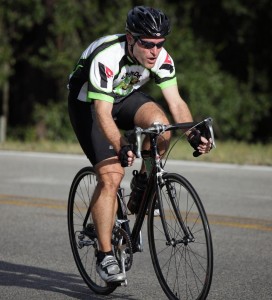 Jeryy Hertzler commutes from Avalon Park to “The Cru”

Jerry Hertzler works for The Cru (formerly Campus Crusade for Christ), and is an avid sport cyclist with the Eastside Cycling Club. We got him to comment on the seven questions as well:

2. Maybe. I’m not motivated by gas prices too much, as the overall cost per mile of my bike is not that much different than my car.

4. I ride a combo of streets, bike lane and sidewalk – about the same percentage of each.

5. I think the County is doing well at including bike lanes on all new roads. Retro-fitting roads for bike lanes might be a good start.

6. I wish more drivers knew that 3′ clearance on roadways is the standard safe distance. I also wish drivers would keep in mind that all cyclists are not the same, so that when they encounter a rude one they don’t use that experience to stereotype all other cyclists. 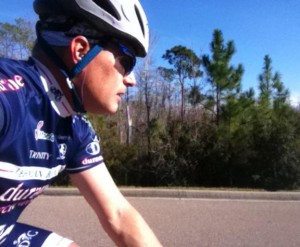 Tim Coleman, another Cru member, also gave us his opinions:

Thanks for doing this article. We need more bicycle awareness!!
1. 37-74 miles per week.

2. I might commute more if gas goes up. Sometimes my schedule dictates if I can ride to work.

3. I have a Bianchi Volpe steel cyclocross/ commuter hybrid with fat 35 cc tires on it for sidewalks and dirt etc. Alafaya Trail especially!!

4. I take Alafaya to Curry Ford to Econ to Lee Vista to Narcoossee to Moss Park. I wish there was a north bound bike lane on Econ. Alafaya is the worst. I will not be here when it is completed. You take your life in your hands, even when you drive on Alafaya under construction. Curry Ford is Nuts. The lanes are wide, but there are no bike lanes marked. People drive 60+ mph on this 45 mph road. I am forced to take the sidewalks on Curry Ford. I would hesitate to ride alone on the roadway on Curry Ford. Side walks are not for bicycles. Side walks are for pedestrians, but I feel I have no choice. I slow way down, or stop, or get off the sidewalk, when I approach pedestrians and say excuse me, esp. if approaching them from the rear.

5. I wish drivers had to pass a drivers test that included bicycle awareness. I, of course, wish there were more bike lanes.

6. I wish drivers knew the law, that bicycles are vehicles too, and that they are required by law to allow 3 feet. (If we want to be treated with the same respect as autos, we should get better at demonstrating that we respect road way laws too, like stop lights and stop signs, I’m guilty too, but try to honor them most of the time)

7. Obviously, Orlando is Vast!! Some cities have been designed with bicycles in mind. Bicycle commuting is practical in Orlando if you are lucky enough to live within cycling distance, and if there are roads safe enough for bikes. Since autos can drive faster and faster, since the suburbanization of the 50s and 60s, and even the more remote sub suburban Long commutes of modern days brought on by our Interstate Wal-mart communities, today’s commutes are nearly impossible to make on a bicycle. I like the Celebration/ Avalon Park model where this might be able to be pulled off. I agree with the above comment that all the roads within 10 miles of UCF should have to have Bike lanes. How about within the downtown area too?