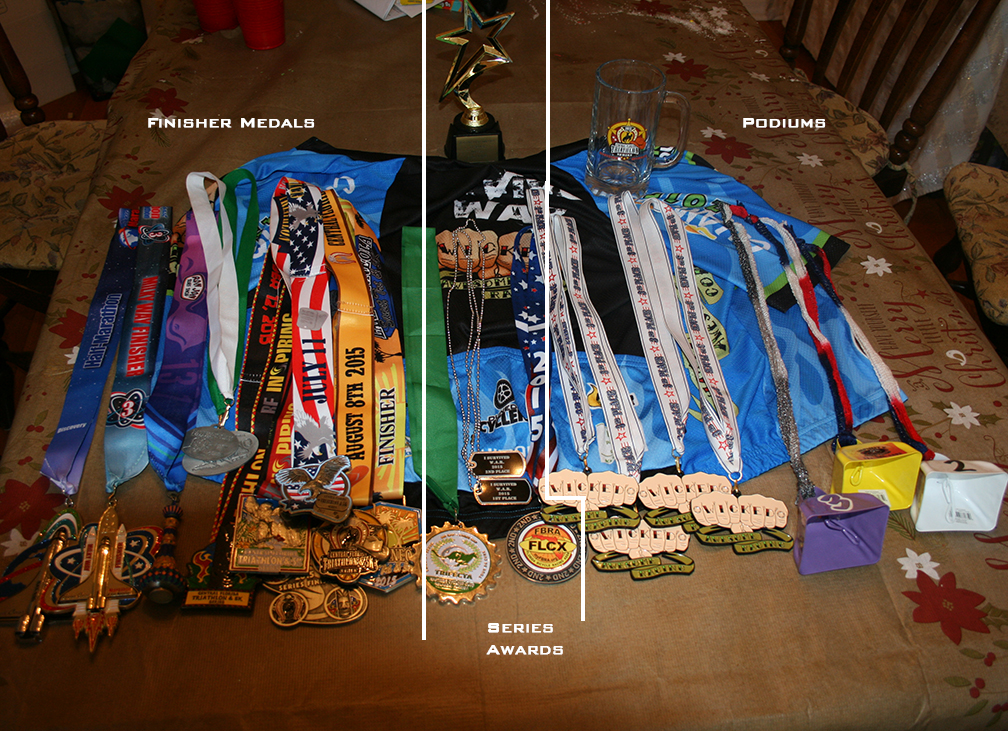 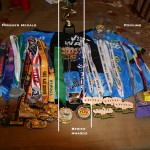 John Tenney tells us about his 2015 goals and wins.

Author’s note: This started out to be a 2015 year in review but who wants to read about someone else’s accomplishments? This year, your author has decided to speak to the other athletes with words of encouragement, inspiration and all around, general, getyourassoffthecouchism. 2015 was a record year for me and yet I am still what I consider to be a low to medium talent rider and a very slow runner. I avoid open water swimming (in Florida) if at all possible. So how did I win all that bling on the left? Read on to find out how it happened.

90% Of Success is Showing Up

My sports are running, duathlon, competitive cycling in time trials, road races, criteriums and cyclocross. In 2015 I was able to amass a large number of finisher medals, podium prizes, team championships and even a championship jersey. How? I am certainly not a top runner or rider by any yardstick. No, I did it by employing some simple rules of success, including one given to us by Woody Allen (and maybe many others): “90% of success is showing up.”

By showing up for all but one of the Airport Time Trial races I got 3rd overall in the Masters 50+ division (a very competitive division, but points are awarded cumulatively.) I never won a race but by finishing 7 of 8 I had enough points to finish on the podium.

By showing up at all the Sommer Sports Clermont Duathlon series, I was 2nd place over all, and on the podium. This is because only two of us finished all 4 races.

Finishing second to Ryan Woodall (Christian is standing in for him) and ahead of 3rd place Brian Davis(!) in the FLCX Pro 1/2 series

Most impressive, by entering more Pro 1/2 Cyclocross races than anybody else, including one weekend when the leaders were at the state road race, I was able to finish on the podium for the series (2nd.)

I also analyzed the rules of each series, and picked the races that optimized my chances to gather points. Very few riders are willing to enter the Pro 1/2 races at Cyclocross. Not really sure why. Maybe it’s the one hour length, the intense competition, the fear of getting lapped (which happened nearly every race) or diverting energy from their chosen division. Similar stories with the other series’ I did well in.

It pays to look over the entry lists and find out where you can shine.

Every year around this time I set up some sports goals to accomplish before the end of next year. Of course, I also review my goals for the previous year to see how I did. In fact, it’s probably best to do this first, in order to better set the goals for the upcoming year.

Every year a couple of things happen. One, I review the goals and find that I managed to make most of them. Two, I analyze the goals that were not achieved. I have found that the reasons for not hitting a particular goal are:

That last one is the one that bothers me the most, of course.

A few examples:
It was too hard: I wanted to finish the state time trial 24.8 mile course in less than 1 hour and 5 minutes. I just didn’t have the chops to do it. I certainly improved over last year’s time of 1:12:50 but 1:11:05 is still falling short of the original goal.

It was not realistic: I wanted to finish a road race without getting dropped. This is doable but will take more than one season. I lasted 4 laps of the PBIR course which I will consider a guarded win. I will continue this goal in to next year.

I had a change in direction: I wanted to complete Six Gap in under 9 hours. I changed direction and competed in a cyclocross race that entire weekend.

Unexpected hazard: I wanted to complete the Blue Ridge Breakaway in under 9 hours. Was doing well on this only to be stopped by severe thunderstorms on the parkway at mile 70.

Injury/Life event: I missed the Spring Fling Duathlon because of my mom’s funeral. Yeah. Not a fun time but obviously family comes first.

How to Pick Your Battles

It pays to read the rules. When a promoter sets up a series on USA Cycling, for example, they are required to list the scoring rules. I read the rules for the FLCX series and the Wicked Awesome Racing series and noticed they both offered hefty points for finishing in the top 25. 1st place was more but not by a lot. This was part of my decision to enter the Pro 1/2 series (which is open to all riders.)

It also pays to do some traveling. The most attended race in the FLCX series was Spooky Cross in Winter Garden, a very central location. However, by going out to Dunedin, Dade City, Fellsmere and Brooksville, just to name a few, I was able to get in some races with very low participation. This often resulted in a podium (three podiums at Infinity Cross in Fellsmere, just south of Melbourne.)

It’s also important to study the calendar. Many weekends have multiple events going on. This can result in smaller than normal fields which optimize the chance for maximizing points.

So What’s The Point?

The Point? Get off your butt. Go to the races. Pick the races that maximize your points.

If I can do it, anyone can.

You may be surprised. No, you will be surprised. There is no reason to fear a race. If you are afraid of crashing then attend a clinic and learn how to avoid crashing. If you want to do better at cyclocross, no place like a race to be around others who can teach you. There are a lot of practice events around, too. In Orlando, we meet every Tuesday evening in Blue Jacket Park to practice cyclocross. In the Tampa area, Josh and Nathan have a Tuesday series featuring a cross circuit and a road crit. Two for your money!

Several clubs practice road races. The Wednesday night airport ride comes to mind. Saturday morning Lakemont. There are plenty of Triathlon clubs that practice and train. You can do an open water swim 6 mornings a week at Lucky’s Lake.

It’s there if you want it. You just have to want it bad enough to work for it and go get it.

Do you want it? 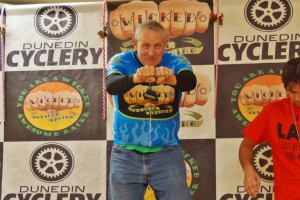