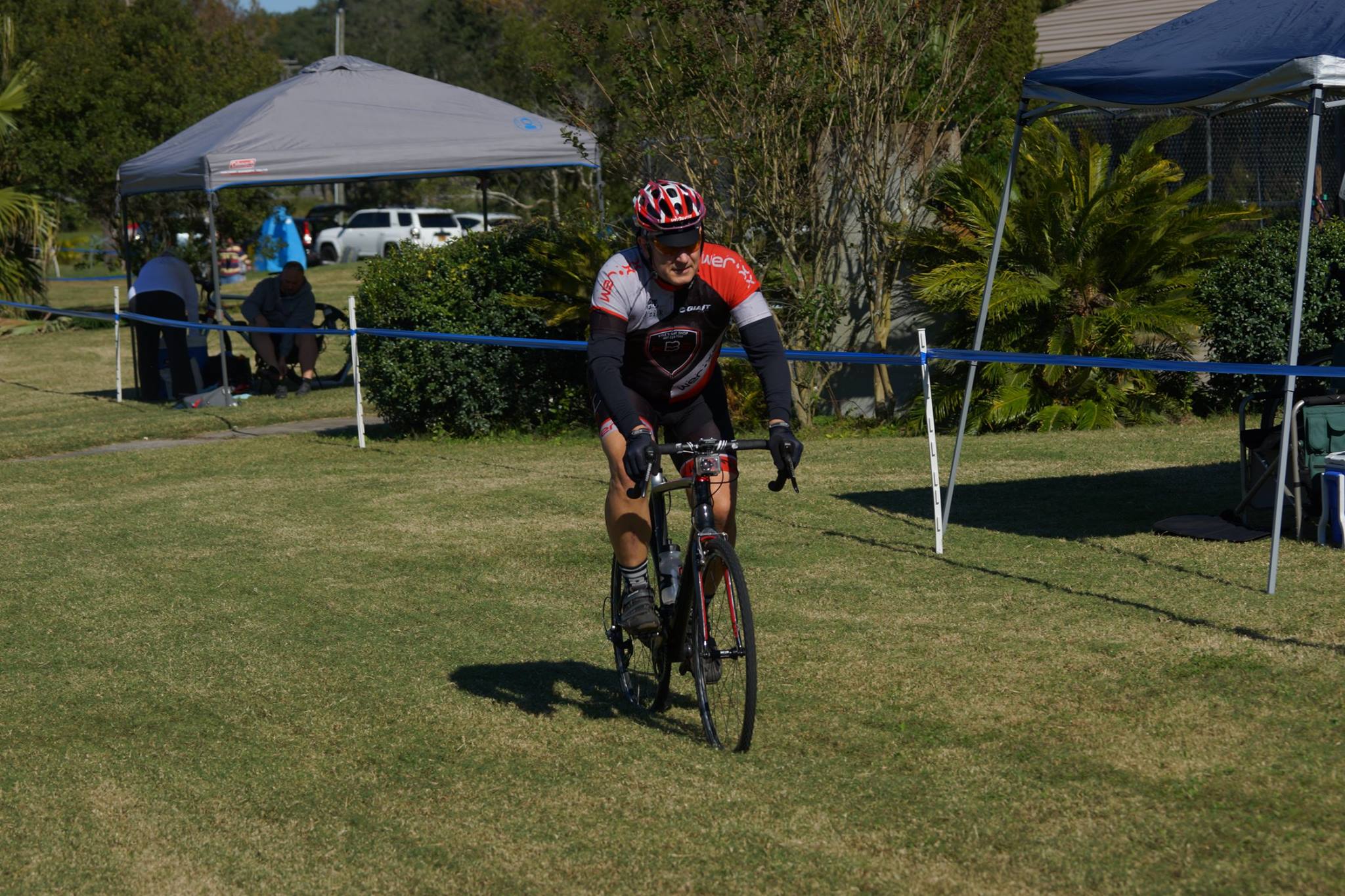 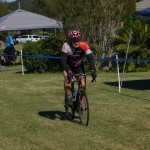 John Tenney is not a fast cyclist. He is not known to “leave people in the dust”. In fact you could say he isn’t really that good an athlete. However, due to his persistence in attending as many races as he could, he finished near the top of the Florida Cyclocross rankings for 2015.

The interview that follows was conducted by an independent reporter in December and was never published. He was unable to sell it to any online cycling mag, but we would like to publish the questions and how he answered them, so here it is:

Interviewer (I): John we can’t help but notice you finished second in the Florida Cyclocross Pro 1/2 category and you are only a cat 3, and that is from a very recent upgrade. We also hear you really aren’t that fast. How do you explain this?

John (J): I guess I just showed up more than others. It’s true I finished last or second to last in just about every P1/2 race I entered, but it is an open division. I just accumulated more points than everyone else, except Ryan.

I: Ryan Woodall? The season winner?

J: Yes. I only saw him at the start of races and when he very politely would lap me, which was just about every race. No it was every race. I never finished on the lead lap if Ryan was racing.

J: Oh no, not at all. That will never happen. I do hope to finish on the same lap sometime though.

I: How realistic is that?

J: Don’t know. I would have to pick up my lap times by quite a bit. Ryan and Josh usually lap me in the 2nd or 3rd lap, although I have taken that opportunity to watch them, follow them for a bit and watch their lines, so I can learn to be better?

J: Josh Thornton, promoter and race director. He and his wife Kaleigh are the owners of Wicked Awesome Racing or WAR.

I: War? for Wicked Awesome Racing?

I: So you had to learn by watching them go by? They didn’t share technique or tactics with you?

J: Oh no not that at all. They are both teachers. Josh would gladly share any advice he had before, after and even during a race. He would give me tips as he went by lapping me a few times. Ryan is not as outgoing but he never withheld any advice. That’s one of the things I really like about FLCX, we’re all in this together. It’s very much a family.

J: You should come out to one of our events and see what happens. We are riding to our limits and having fun doing it. We heckle each other but it’s all for a laugh.

I: Heckling seems to be a pretty big part of cyclocross.

J: It is down here for sure. I haven’t been to many cross races out of state yet, so I can’t comment on other states.

I: What was your best heckle?

J: My best heckle? You mean how I heckled someone else? Or how someone heckled me?

J: I really can’t remember what I am saying when I heckle but I’m pretty sure I got a lot of laughs at Spooky Cross when I heckled my teammates (Kyle’s Bike Shop) and told them they were “almost as slow as me!” As for being heckled, well several come to mind but two stick out, both at WAR #2, where the ref heckled me from the PA system, telling me that he could go faster than me with sneakers on a mountain bike with training wheels. You know you’ve arrived in FLCX when the ref heckles you. At the same race, Layne Hampton, with Hawkdancer Photography, saw me slowing down to negotiate a difficult section and he shouted out: “Hey John! You’re blinker’s on!” That made me laugh.

I: (laughing) Yes I can see how that would. OK let’s get back to racing. How is the rest of the “family” responding to your success in P1/2?

J: (pause) Well that’s an interesting question. I think most of them were supportive, or at least not hostile, once they got over the incredulous feeling of “How did he get up there?” I’m referring to the podium at the banquet. Brian Davis was third, but as we got up there I said to him under my breath “Don’t worry, this will never happen again” and he said something like “Oh yeah you can count on that!” I think he was half-serious, half-kidding. Who am I kidding, he thinks it’s a joke. I believe several riders think the series is a joke now or at the very least the point system needs to be changed. I believe many don’t think I belonged up there.

J: No I didn’t cheat! I just entered more races! Look, I saw a class that wasn’t getting a lot of riders … Well let me start over. In 2014 I noticed that USA Cycling ranking points had a lot more to it than just beating more riders. I noticed that I could get better points finishing last in the Masters 55+ race than finishing mid pack in Cat 4/5. That’s because the system rewards points based on the level of the competition. The M55 class has a lot of Cat 1s and 2s in it so I would start climbing up in the rankings even though I would get lapped.

I: So you planed from the beginning of the season to enter the P1/2 and get better points?

J: Well no not really. I started the season planning on doing M55, Cat 4/5 and the mountain bike class at WAR. I was the champion last year and figured I had to defend my jersey. More on that later. No, I didn’t plan on P1/2 at all. However, due to another big event going on the same weekend I noticed that no one was entered in to P1/2 at WAR #2. I ran up to Kaleigh and Nathan (Rogut, the official) and asked, “Hey if I get two other guys can we run a lap or two and get a finish in P1/2?” They said “sure as long as you pay the entry fee.” I actually paid for the other two guys to race with me, Patrick O’Shea an Michael Toth. Patrick beat me, which I haven’t decided yet whether I forgive him or not, and Michael dropped out after a lap, but we all stood on the podium afterwards. The next day three of us entered (me, Chase Forman and Brian Davis) and we all got a podium again. I ended up with 2nd and 3rd.

It wasn’t till later that week that I saw on the FLCX standings that I was now second in points to Ryan Woodall. That’s when the idea came to me that I had a chance of getting a top 3 in P1/2. Also, the USAC ranking points were even better here than in M55.

I: So you saw a chance to do well even though you aren’t a fast rider. Some would say that’s just good strategy.

J: Yeah I agree, but I also expect the point scoring system to be adjusted in 2016. I can see the other rider’s point, that it doesn’t accurately reflect my quality of riding. Although I think I won the “most laps raced” award if there was such a thing.

I: Most laps ridden? I thought you got lapped every race?

J: I entered the most races. WAR #2 alone I did 27 laps of racing in and other weekends were the same. I usually raced 3 or sometimes 4 races a race day. At the banquet when Josh introduced me as the mountain bike champion (again) he called me his “best customer.”

I: Oh yes, tell me about this. Why mountain bike? In a cross race?

J: Some promoters put on a mountain bike class. Not everyone can afford multiple bikes so we want to welcome mountain bikers. Plus, on a lot of these courses, especially Josh’s, it’s fun to ride a mountain bike on them. Yes it’s kind of a joke that I won the mountain bike division of a cross race series but I’ve got two championship jerseys now. Seriously though, I’m hoping someone takes it from me next year. I only won it this year because Brian Hastings (really fast guy) went and broke his collarbone. I have a bike that can be zip-tied now and be eligible for single speed, and that looks like fun.

I: Zip tied? Wasn’t that a controversial point this year? I remember hearing something about that.

J: (long pause) I’m too new to the sport to comment on that. I’ll pass.

I: Well I’ve got plenty to go on John, thank you for sharing with us.

J: My pleasure. Come see one of our races some time!