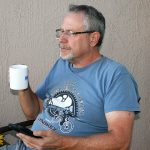 As I sit on my porch drinking a cup of coffee, a practice which I highly recommend, I think back to about 24 hours ago when I was doing the same thing on a different porch, in a different city. At that time, I expected to do the same thing again in the future.

It was Dade City, Sunday morning, the second day of WAR. WAR you ask? I’ll get to that. I was sitting with a good friend, getting ready to head to Stanley Park for the second day of the 2017 Cyclocross season.

I had just spent the night on the couch of Sir Layne Hampton (dubbed Sir by the Cyclocross Community) which in itself can be described as an adventure. What with Layne making frequent trips to the bathroom, both for himself and his overly affectionate dog Millie, and Wayne Keller sleeping on a mattress in the kitchen, it can only be described as a “cyclocross experience.” There is nothing like having a dog wake you up by sticking her nose in your butt while trying to sleep on a couch. Yet strangely, par for the course for a “sleepover” at Layne’s. 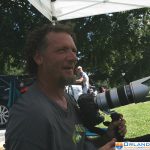 Layne is a “character.” He served as a Marine, he is opinionated, boisterous, quick to laugh and certainly the life of any party. He is also an excellent, journalistic photographer. I compare him in contrast to Wayne, who I consider an artistic photographer. Layne documents the event, while Wayne catches the art in action. Both are necessary and desirable for sporting events.

Layne was introduced to us by Josh and Kaleigh Thornton at their annual contest of events called the Wicked Awesome Racing series, or WAR. He’s been taking our pictures for three or four years now, and all look forward to the hundreds of photos he uploads to his Facebook page: Hawkdancer Photography. I’ve come to rely on him to document the cyclocross events like no one else. I’ve also come to rely on Wayne Keller to provide us spectacular shots that turn heads. 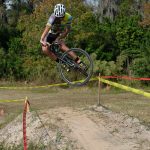 Wayne showing off his skills at EOCF in 2016. Photo by MK.

Wayne Keller is relatively new to the Cross family but has been warmly welcomed for his sense of humor, fine writing skills, and an amazing knack for capturing the essence in an artistic photograph. He is also really stinking fast. As the photo to the left shows, he is not lacking in talent or showmanship either. We expect great things from him. After sharing a house with he and Layne, I feel that our relationship has gone to a new level, as the jokes we shared can only be described as hilariously funny but decidedly unprintable.

One comment Wayne made came to mind. “I like meeting guys like Layne, who are not Vanilla or Normal.” I replied, “Wayne, have you ever met a normal person at a cyclocross event?” I’m still waiting for his answer …

Here are two examples of Wayne’s handiwork with the camera. Anyone that can make me look good in a bike kit has indisputable talent. 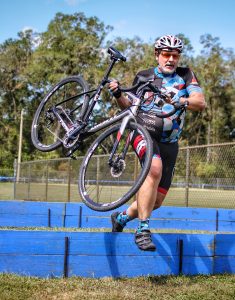 A rare moment when I have both feet off the ground. Photo by Wayne Keller 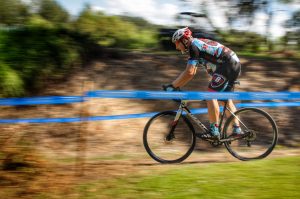 This photo is so good I don’t even know where it was taken. Photo by Wayne Keller 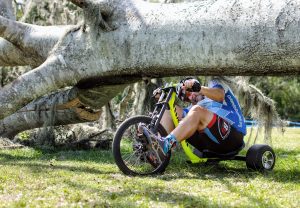 It was a tight squeeze under the fallen tree in the fiercely fought Patrick Cup International Dead Tree Challenge. Photo by Wayne Keller

Josh Thornton, the course designer, typically planns for two weekends at Stanley Park (Dade City), one at Burke’s Park (also Dade City) and one wild card weekend. This year the wild card will be at Brooksville (at an old golf course.) All the courses are built around hilly terrain and all are intended to be extremely challenging. The course last weekend was no exception. Frequent riders recognized the course Josh laid out as nearly an exact copy of WAR#1 two years ago, although this year the course was dry, compared to the very muddy conditions the last 2 years.

Here is my GoPro video of the first lap of the Pro 1/2 and Cat 3 race. It doesn’t really show all the climbing, but that is standard with videos.

The event had what this writer thought was a surprisingly decent turnout, surprising because the weekend conflicted with many favorite events going on in the southeast, such as Hailes Trails MTB race, Six Gap, Augusta 70.3, Chattanooga 140.6, and even some triathlon going on at Ft. DeSoto.

If you’ve been to a cross race, you know how great it is when there are a lot of people there. The taunting, heckling, joking around and of course the special handups from the Village Idiots, all make it a successful social event.

The Series Within the Series
A new series started last year, called the Patrick Cup International. It is a very serious affair, normally open only to people named “Patrick” but the founders have decided to allow guests, with the intent that sometime in the future they change their name to Patrick. (Note: my name change form has been submitted.)

This event normally runs at cross weekends after the last race on Saturday and usually involves death defying tests of strength, fitness and agility beyond the means of mortal men not named Patrick. This week was no exception. The Big Wheel race was spiced up by the addition of a fallen tree, courtesy of Hurricane Irma. Not only did the racers need to navigate the lengthy course (almost 100 yards) on a big wheel tricycle, but also had to perform cycling limbo underneath the fallen tree, which barely cleared the handlebars. It is no surprise that Patrick Cup International founder, organizer, perpetrator and all around big cheese Patrick Thomsen won the event handily.

The FLCX Series
Our promoters put on races in central and north Florida, not much in the south. It’s probably because of the terrain, as south Florida can get pretty swampy and very flat. Still, I’m sure we all would like to see a southern venue.

The Fans
Cyclocross is one of the rare cycling events where you can watch the entire race without driving around. All the courses are small enough that you can see 90% of the action from a chair. It’s also fan interactive. You will see fans (and riders who aren’t in that particular race) “handing up” a Twizzler, a marshmallow, a small cup of beer or soda or even a shot of some nasty bourbon (that really happened.) Heckling is not only allowed, it is encouraged. While most hecklers are supportive I can remember some great insults, some even from the referee. I think my favorite was at a Burke’s Park WAR where I was having a slow day, slower than usual even, and Layne shouted out, “Your blinker is on!” That one made me laugh.

Special Mention
You have to experience a race with the Village Idiots racing team in person before you die. You really do …